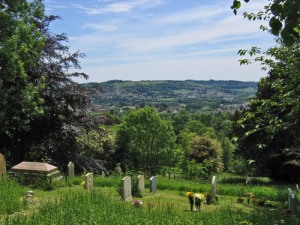 Randwick Village is a small picturesque town on the northern slopes of the Frome valley in Gloucestershire, England. Randwick Village dates back to medieval times and was formerly a centre of the cottage weaving industry prior to the Industrial Revolution (1760-1820). Although only a small Parish Council of only 110 households, to celebrate the Queens Diamond Jubilee in 2012 the residents of Randwick Village created a continuous length of bunting reaching almost 5 km and broke the world record! Randwick City and Randwick Village, England, share the same name and a unique bond. In 1842 Simeon Pearce (1821-1886) migrated to Australia, and purchased land which he named Randwick after his Gloucestershire birthplace. Simeon Pearce helped form the Randwick Municipality and was the first Mayor, holding office from 1859 to 1868 and again in 1882. He is known as the ‘Father of Randwick’ and is buried in the cemetery of the historic St Judes Anglican Church in Avoca Street, Randwick. Simeon Pearce was the driving force behind the building of St Jude’s Church, which was modelled on the church in his home village of Randwick, Gloucestershire. The sister city relationship with Randwick, England was signed in 2009 celebrating the 150 year anniversary of Randwick City. There are very few Sister City relationships that can be traced back to one of the City’s inception and are established on strong historical ties.

What’s On in Randwick City Council